Prayer does not come easily when we are overwhelmed, and out of our depth as a friend was in the last few days, when becoming suddenly bereaved and not knowing where to begin to solve all the practical problems resulting. For those of us who love The Lord this is where the Holy Spirit will intercede for us even before the words are framed, and how quickly The Lord will minister to us if we will but allow ourselves to listen.
What The Lord whispered in this instance were not new words but old ones, and not easily obeyed, because they require from us a positive reply and a little of both the courage and faith of Simon Peter when stepping out of the boat in Matthew 14: 22-32 to walk on water…. For my friend there was no divine guidance plan, no agenda for the day simply, these lovely words from a very old Hymn by William Cowper, who was himself subject to very deep depression at times, the kind of depression that my friend felt was surely going to be the end result of what the unknown future might hold:-

“God moves in mysterious way
His wonders to perform;
He plants his footsteps in the sea,
And rides upon the storm.”

I told you they were old words, but given with the spirits touch they spoke confidence to a faltering spirit and opened the eyes of my friend to gaze in wonder, to see the Feet of Jesus walking on the sea; His reaching out with strong arm as Peter began to sink; opened them to read that the psalms speak of The Lord riding the very wings of the storm, that she dreaded, coming to her rescue…. and after all it is a true, indisputable fact that ‘stillness’ lies in the very eye of the storm.

“Your path led through the sea,
your way through the mighty waters,
though your footprints were not seen.”

For that is how The Lord rescued Israel, He led them not by an easy path, with all the answers known, but through the piled up waters of the Red Sea, those footsteps took courage, but with each step faith grew, and so, my friend now felt would hers. She remembered that she was called to walk by faith and not by sight; that she would never experience the calm and stillness in the eye of the storm and in the heart of God unless she first gave up trying, and seeking ways to evade it.
As for fear, well there is such a thing as falling into the arms of God. This was how The Lord was teaching His child how to walk, head knowledge is nothing, experience is all!

Most importantly, it is not knowing the path but walking it!

Was the water cold or warm? When Jesus came to John to be baptised.

Last Sunday a married lady was baptised, an unusual event in an Anglican Church where babies are christened. This lady faces the loss of a loved one in the future and this was a brave commitment by some one not born into the Christian Faith, I admire her courage and found myself wondering:

Was it cold, Lord,
The water was it cold?
As you stepped down from the bank,
into the river, was the water cold?
And, did you know,
even then,
dearly beloved Son of God,
what lay ahead, in the future,
wrapped in the Father’s will for you?

When I come to the edge
of what is now,
preparing to step into future,
unknown;
All, I ask,
is your Hand in mine,
The seal of the Spirit on my brow,
and, His Peace,
the Peace of gentle dove
settling in my heart:
and I am ready to start,
again,
A New Life in you.

I am wondering was the water, warm or cold for you, when you decided to follow God’s dearly beloved Son?

Our Grandmothers say,
‘Mind your Ps and Qs;
But the Spirit says,
‘Mind your Bees and Peas’

Study the bees
Their bizzzziness is Honey.

Tend your sweet peas,
Can’t be bought with money;

My Precious Honey!
Not sold for money.

I find myself remembering these words which came at a vey busy time, quite frequently at present, 2013 is promising to be full of more busy, busy days. There is a scripture verse which also seems timely, particularly it’s last words,

I don’t want to forget what kind of person I should be, as I play Martha’s role, I still need Mary’s listening ear! And, although non of my busy-ness earns a copper, it is a welcome thought that patience, peace and purity have more value in the Lord’s eyes than the best monetary offering I can give.
To anyone who reads these words, ‘Grace and Peace’ from Jesus be with you and a double portion of his precious honey! 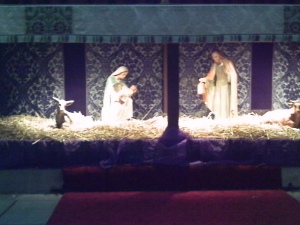 Already, with only five days gone people are looking for a shoulder to cry on, many I know are facing conflict, hardship and difficult decisions.

Tomorrow is the First Sunday of Epiphany in the Calendar of the church, the first Sunday of four over which we think of the Three Kings, (Magi) visiting Christ in his lowly abode, His Baptism and the Father’s testimony of His Son, the changing of the water into wine at Cana, in other words we think of the ways in which the divinity of Jesus is made manifest.

I think of the manger bed, the poverty and hardships of the times in which Jesus lived and reflect on my own times and how I can show a ‘little’ bit of my God in them; I find myself pondering these words from Mother Teresa of Calcutta.

Jesus is the Word to be spoken.

Jesus is the Truth to be told.

Jesus is the Way to be walked.

Jesus is the Light to be lit.

Jesus is the Life to be lived.

Jesus is the Love to be loved.

If I remember these words, perhaps my shoulder will be more comfortable for someone who needs it; and however dark the days ahead may be for me, I have the light of Christ to lighten them and no one ever loves God unless He first loves them; Love is the treasure which Mary held in her arms.

Jesus is the Love to be loved and held.