I didn’t take this picture, but I saw the foot whilst on holiday with my sister in Rome, 2004. I believe the reliquary is silver/gilt as to whether it actually does contain Mary Magdalene’s foot – I leave that to you. The inscription on the plaque intrigued me, “The First Foot to be entered in the Tomb of the Risen Christ” – we have two feet, who actually was there to record whether it was the right or left foot?

My favourite Gospel, St John (ch 20 v1-9) gives the honour of first footer to the apostle Peter, this Gospel doesn’t have an account of Mary going in at all but I rather feel she did. St Matthew 23: 6 says an angel invited the women to come, see the place where The Lord lay, he doesn’t say Mary was first though, St Mark says Mary entered the Tomb but in the company of Mary the mother of James and Salome and St Luke also says the ‘women’ went in, but not which was first.

I suppose it is universally true that to be the first is better than to be the second, and definitely better than being the last. But, is it?

Didn’t Jesus say something about the first being the last and the last the first?

On Maundy Thursday we will recall, once more that at the last meal which the Lord shared with his disciples he took a a towel, poured water into a basin and washed his disciples feet; the First became the Last and attended to the menial task of washing, dusty, hot and bothered feet. With all of what was about to happen to him weighing heavily on his mind, hammering with iron fist on his heart, The Lord Jesus was mindful that those feet needed washing, he sought the comfort of others first put himself last.

Perhaps, just perhaps, the foot which truly enters into the Tomb of the Risen Lord is the foot of the person who serves, and who truly understands that in Jesus to be first is rather unimportant, as Paul puts it, ‘And the head cannot say to the feet, “I don’t need you!” It doesn’t matter, right or left foot, right or left hand, we are all essential. The wonderful truth, Mary Magdalene knew for herself – she was important to Jesus simply because he loved her, he loved them all – he loves you, he loves me; there is no silver casket for our feet, there is a place for us in heaven, because His Foot entered in first! 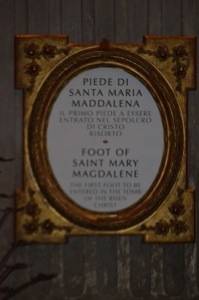